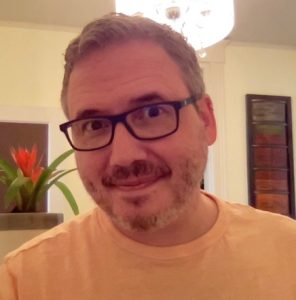 Steven Fantes serves as EPN’s Public Affairs Manager. A non-profit veteran for more than 25 years, he joined the team in April 2022. Steve coordinates relationships between EPN and other allies, manages EPN’s social media accounts, and spearheads EPN’s efforts to recruit a greater diversity of employees at EPA.

Steve recently worked as Operations Lead & Program Editor for a consulting agency in Boston that specializes in win/loss analysis. During his tenure, he proofed and corrected written interview transcripts for major finance and technology clients. He also assisted in web design and strategy and with quality control for the agency’s proprietary software. Earlier in his career, Steve was a Meeting Planner for the American Bar Association where he helped plan their bi-annual meetings by organizing meeting materials and event logistics for attendees and interstate vendors.

Steve holds a BS in Theatre from Illinois State University and an MFA from The University of Georgia and is a current member of Actors’ Equity Association.

Steve lives in Boston with his husband and daughter.